Kamphoefner was born in Des Moines IA and grew up in Sioux City IA. He graduated in Architecture from the University of Illinois and in 1931 received a Masters in Architecture from Columbia University. Kamphoefner said he was introduced to Modernism by Joseph Hudnut. He entered private practice in 1932 in Sioux City IA and developed a specialty in outdoor music pavilions. Starting in 1936, he was associate architect for the Rural Resettlement Administration in Washington DC til 1937. From Washington, he moved west to teach architecture at the University of Oklahoma unti 1948.  Kamphoefner's years in Oklahoma: Part 1. Part 2. Part 3.

In 1948, he was appointed first dean of the School of Design at North Carolina State University and in short order elevated the school from obscurity to national prominence. A passionate Modernist, Dean Kamphoefner’s ultimate goal was “the development of an organic and indigenous architecture... to meet the needs and conditions of the southern region.”

Kamphoefner’s changes at the beginning of his tenure were swift and effective. He sacked most of the old faculty and brought in a new team including Matthew Nowicki who designed Dorton Arena and gave Raleigh an internationally-known landmark.  He hired George Matsumoto who became one of the state’s foremost residential Modernist architects; Terry Waugh, who became head of NCSU Campus Planning; Duncan Stuart; critic Lewis Mumford; James Fitzgibbon; and Eduardo Catalano, who put Raleigh on the map with his famous 1954 hyperbolic paraboloid house, now sadly destroyed. Other new hires included Harwell Hamilton Harris, former Dean of the School of Architecture at the University of Texas, and Robert Burns, whom Kamphoefner appointed as head of the Department of Architecture in 1967. Kamphoefner instituted a distinguished visitors program which included Frank Lloyd Wright and Richard Neutra among others; raised admission standards; and placed the school on the leading edge of Modernism. The school expanded programs including Product Design in 1958 and a Graduate Program in 1968. 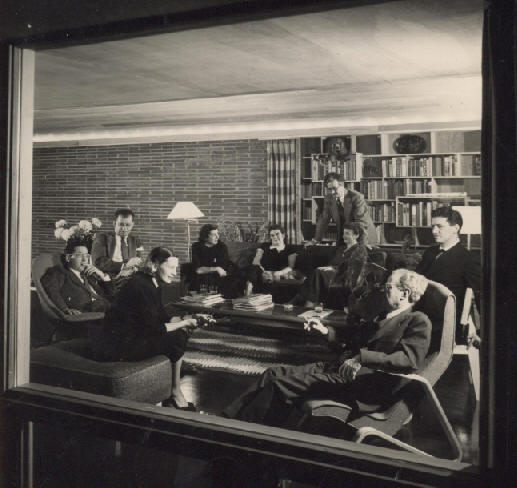 In 1960, on the recommendation of Catalano, he hired 31-year-old Brian Shawcroft, an architect from the UK who just completed his Masters in Architecture at MIT and Harvard. A renowned photographer, Shawcroft closely shared Kamphoefner’s architectural philosophy and also never yielded to the eclecticism of postmodern trends. In 1988, he declared that Shawcroft’s “buildings provide the only good architecture in . . . [Raleigh] which is blighted by so much architectural trash.”  During his tenure, he elevated NCSU’s program from complete obscurity to national prominence. 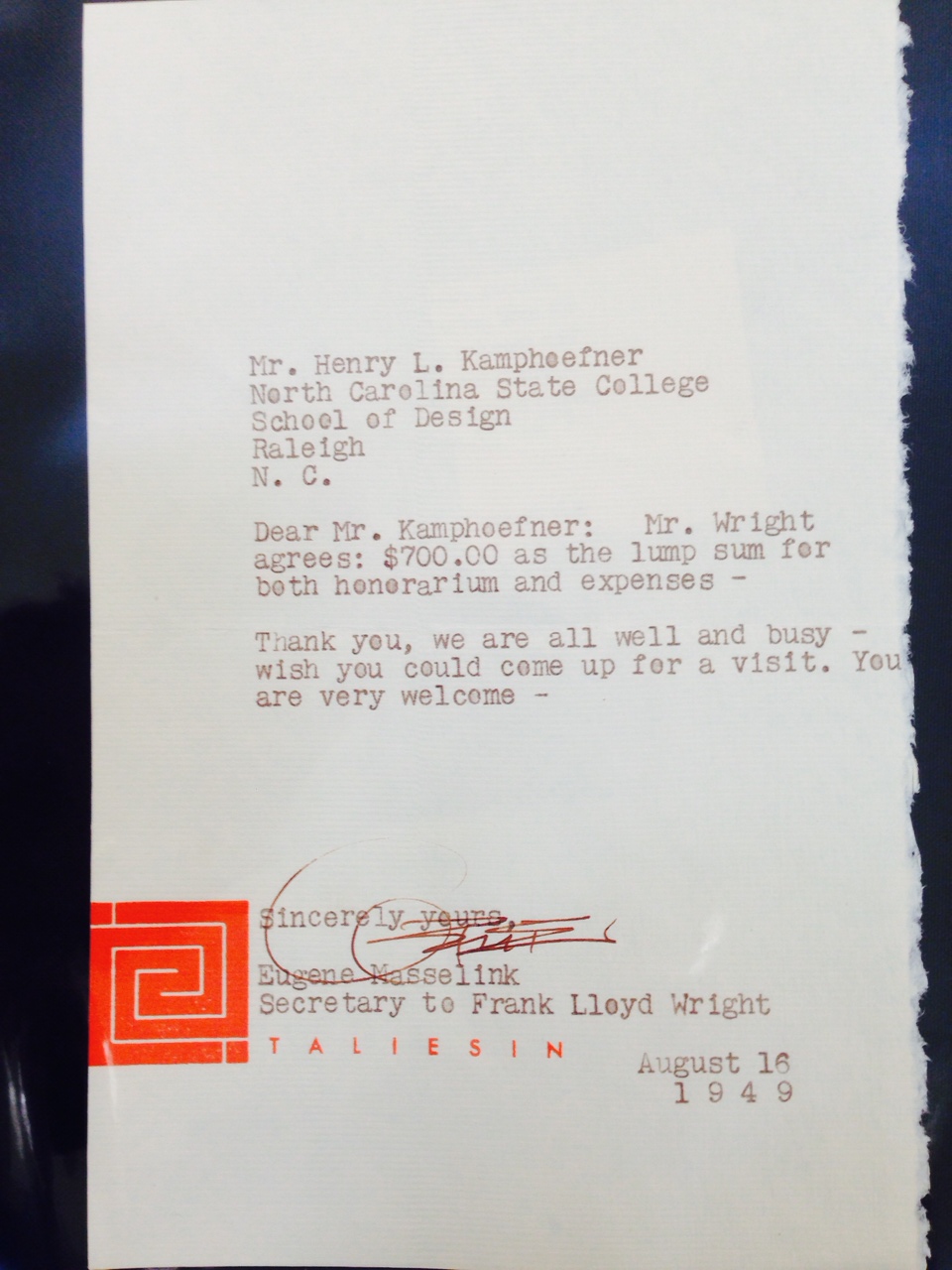 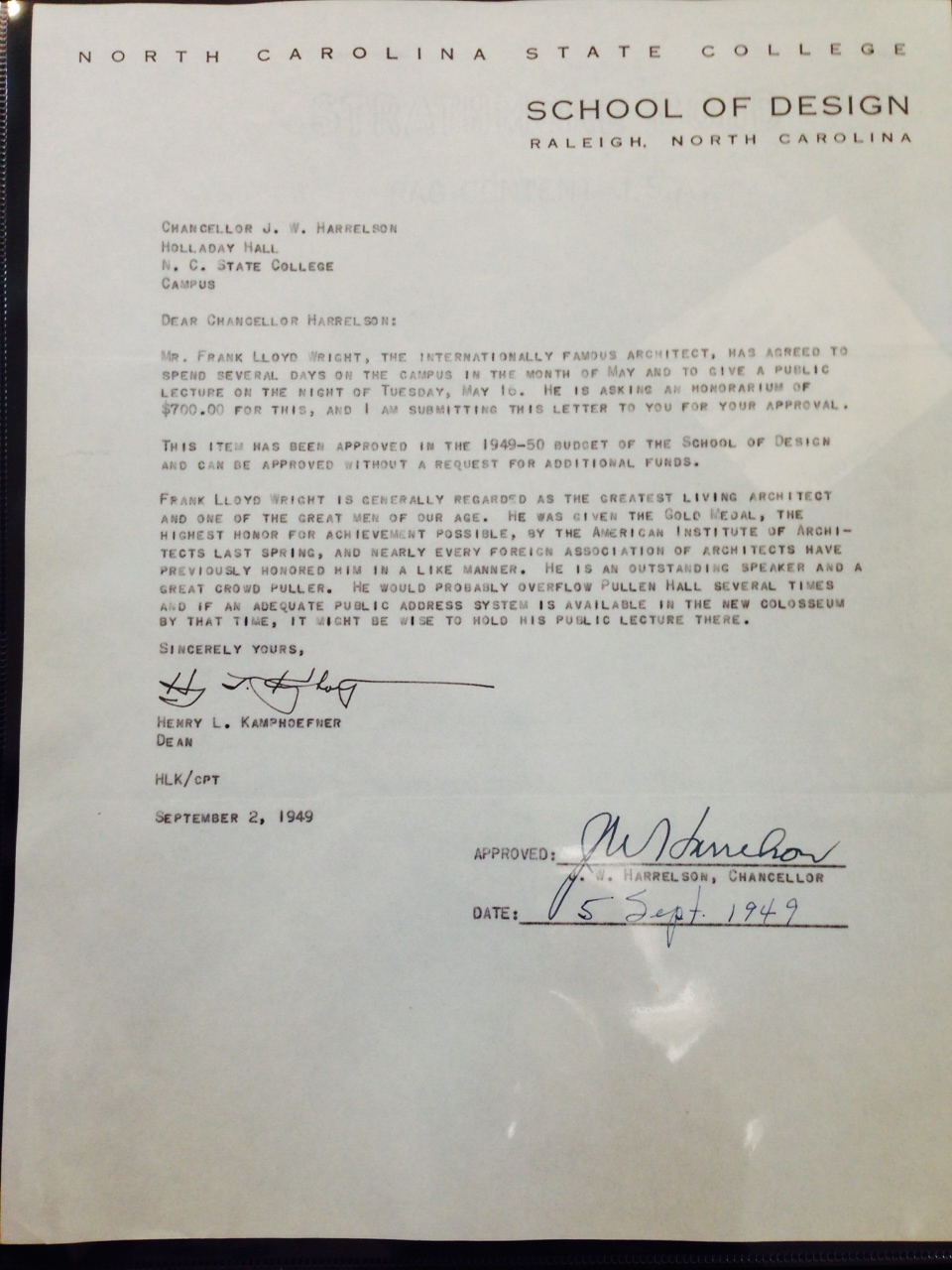 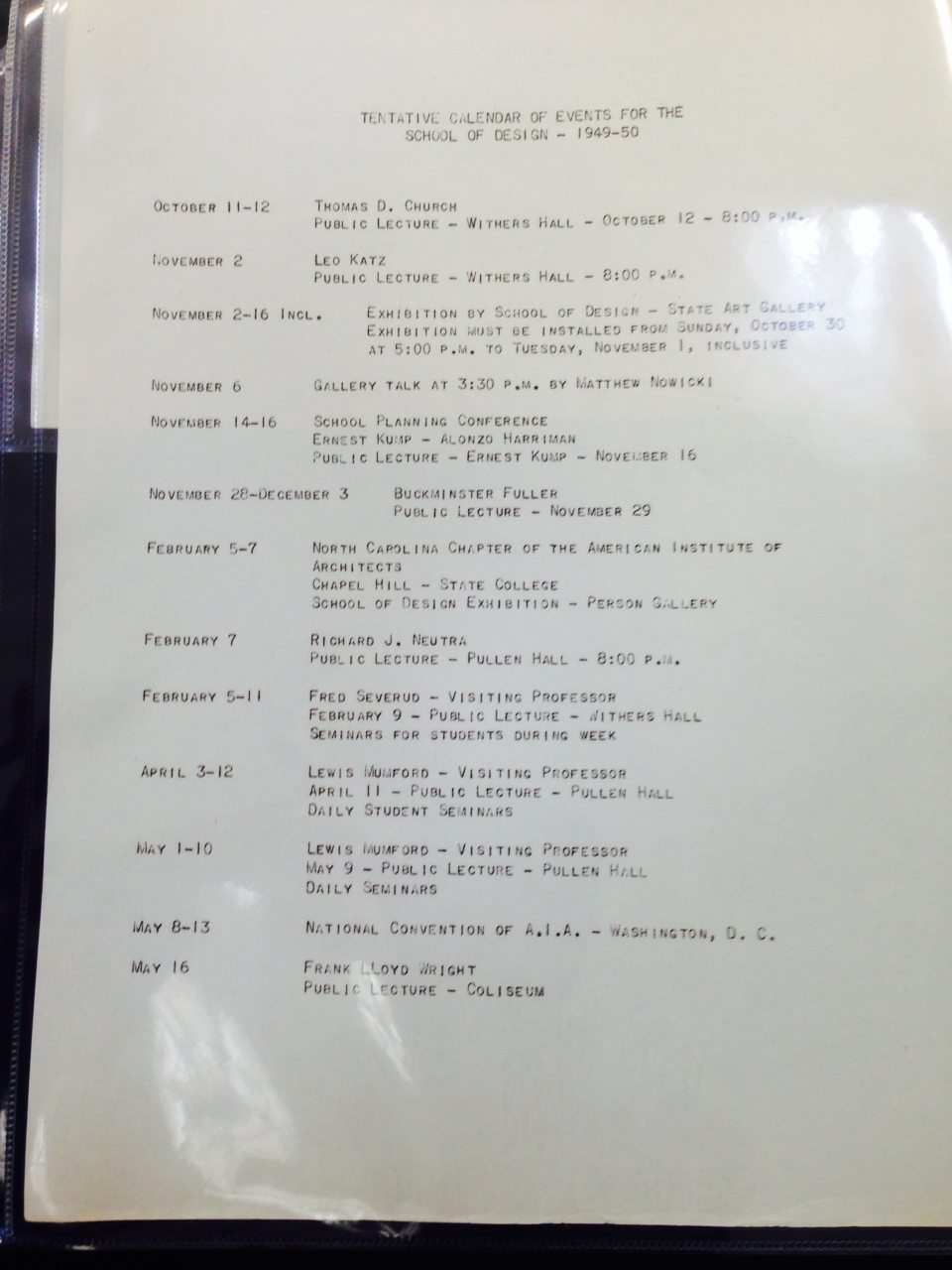 One of Kamphoefner's greatest contributions to Raleigh's built environment was his way around the state's bureaucracy. His faculty, since they were technically on the state's payroll, were prohibited from seeking work on state-funded projects. Kamphoefner created partnerships and mechanisms where his faculty were hired as consultants by other design firms, opening the door to the design of hundreds of significant buildings by NCSU faculty.

He was forced to retire because of age in 1972, staying on at the school to teach part time.  He was eventually named Dean Emeritus, but conflicts between Kamphoefner and the new Dean Claude McKinney lost Kamphoefner his teaching position. He taught briefly at Meredith College. To Kamphoefner’s disappointment, both he Modernism had fallen out of favor, both with the public and the profession. It was time for him to step back.

Kamphoefner was a vocal critic of Edward Durell Stone, publicly criticizing his two major buildings in Raleigh:  the Legislative Building and the NC Museum of Art.

In December 1983, Kamphoefner wrote an article on Buckminster Fuller in the NC Wataugan which was less about Fuller and more about recently "retired" Kamphoefner. Also includes comments on Fuller by his colleague T. C. Howard. Pages one, two, three, four, five, six, or the entire document.

Kamphoefner had an unparalleled impact on the architecture of North Carolina and the Southeast. He was awarded the 1978 North Carolina Medal and the 1977 Topaz Medallion for Lifelong Achievement in Architecture by the Association of Collegiate Schools of Architecture. In 1989, the NCSU School of Design named their 1978 addition, designed by Harry Wolf, as Kamphoefner Hall.

Just two years before his death in 1990, he bitterly acknowledged Modernism’s fall, lamenting that prominent architects were “selling out for a neo-modernistic populism” and that the famous maxim of Louis Sullivan, “form follows function,” was being replaced by“form follows money.”

To slow this movement, he established the Kamphoefner Prize, a gift of $150,000 to AIA North Carolina for career excellence in the Modern Movement of architecture.  Kamphoefner, in his imitable directness, defined the criteria for this award very specifically:

"The donors and the Selection Committee for this award anticipates that the chosen architect has demonstrated a consistent integrity and devotion over an acceptable period of time to further the modern movement in architecture without yielding to any of the undesirable current cliches, neo-modernistic mannerisms, or artless historicism that have flawed the building culture of today."

Brochure on the Kamphoefner Prize: pages one, two, three, four.
Recipients to date:


2013 induction of Kamphoefner into the Raleigh Hall of Fame, thanks to efforts of Roger Clark and Ben Taylor.

Frank Lloyd Wright, left with Kamphoefner, visited the School of Design at NC State University in May of 1950.  He spoke to over 5,000 people at Reynolds Coliseum, at the time the largest attendance for any US architecture lecture.  He opened with "it's nice to be back in Charleston, South Carolina."  Wright was just one of school's many well-known architecture guests such as Buckminster Fuller, Mies Van der Rohe, and Richard Neutra. 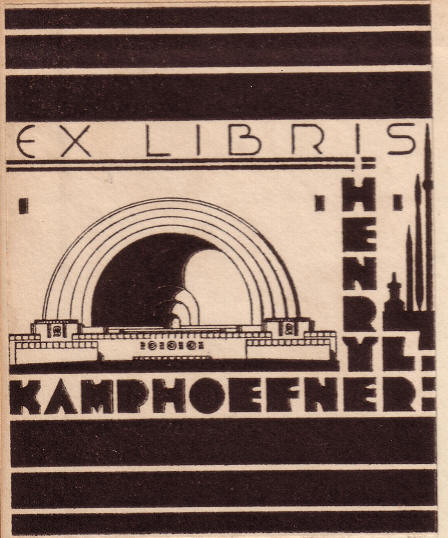 Kamphoefner put this personal label on each of his books.

The 1950 NCSU School of Design curriculum with a full list of the pioneering faculty hired by Kamphoefner.

The 1990 announcement by the NCSU School of Design of Kamphoefner's death. 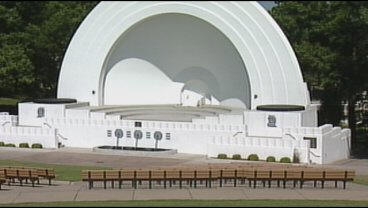 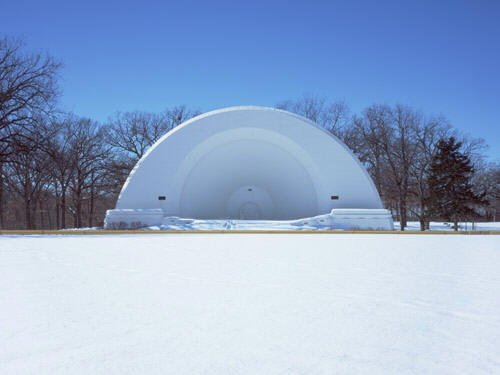 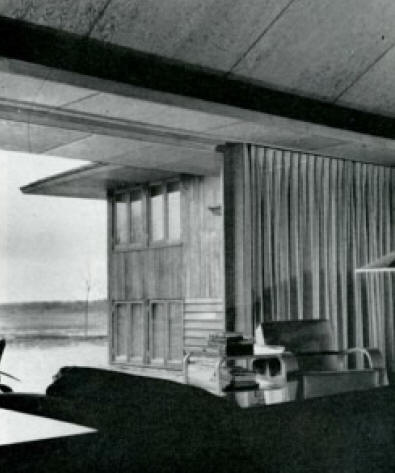 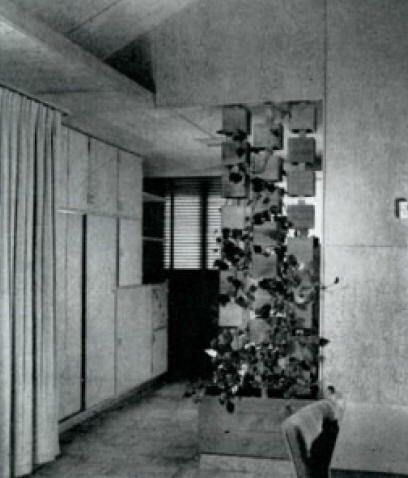 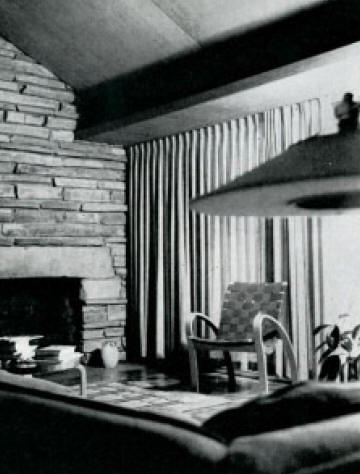 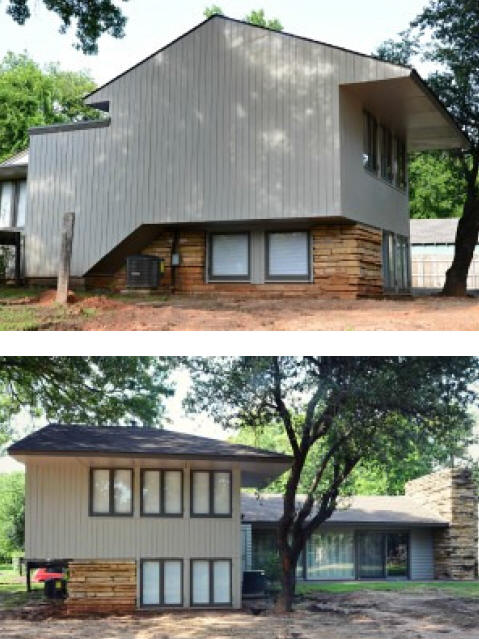 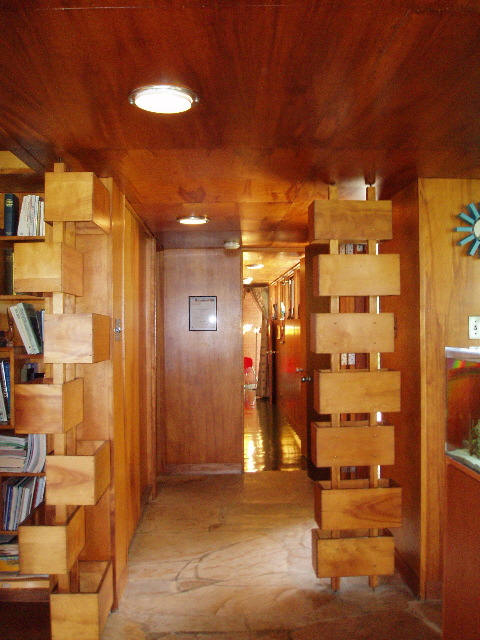 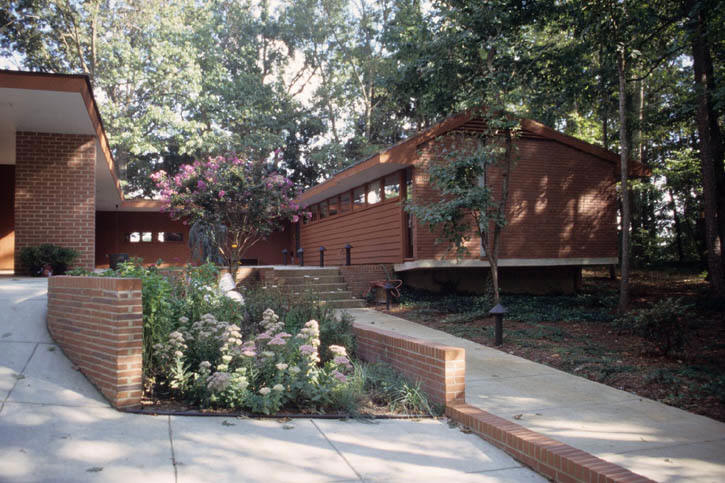 1948 - The Henry and Mabel Kamphoefner House, 3060 Granville Drive, Raleigh. Designed with George Matsumoto. Built by J. M. Thompson. Charles R. Larson (Henry’s nephew) and his wife Roberta inherited the house and rented it out for a number of years. Architect Tika Hicks and Bryan Hoffman were among those renters; Hoffman did a restoration in exchange for a lowered rent. Sold to T. Connor Murray in 1996. Sold in 2000 to Daniel and Virginia Petrocella. In 2003, Kamphoefner’s protégé, architect Robert Burns, did a renovation and addition, built by David Ballard Construction. Deeded in 2009 to Daniel Petrocella. Sold in 2016 to Jeffrey B. Childers. 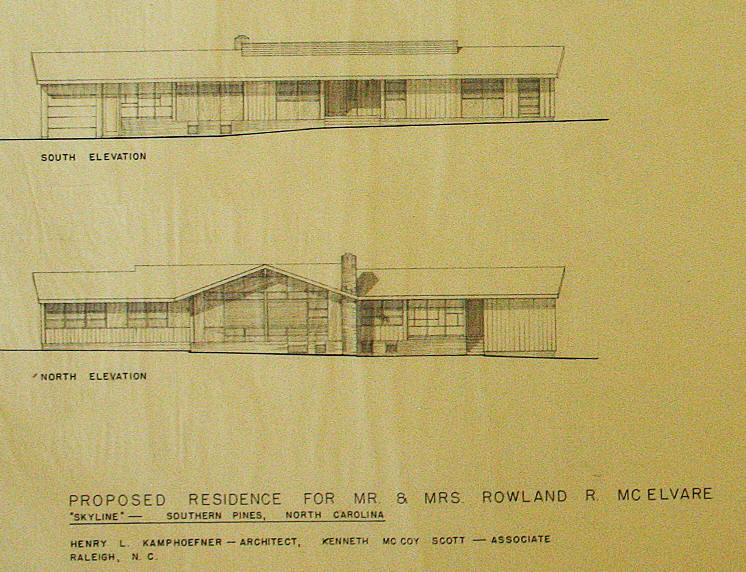